Gallstones or Indigestion…How to Tell the Difference

You have a strange abdominal pain strike you after a meal, but is the issue simple indigestion or could it be a gallbladder attack? Both conditions are common, and both can leave you feeling nauseous and uncomfortable. So how do you tell the difference, and when do you need to worry? 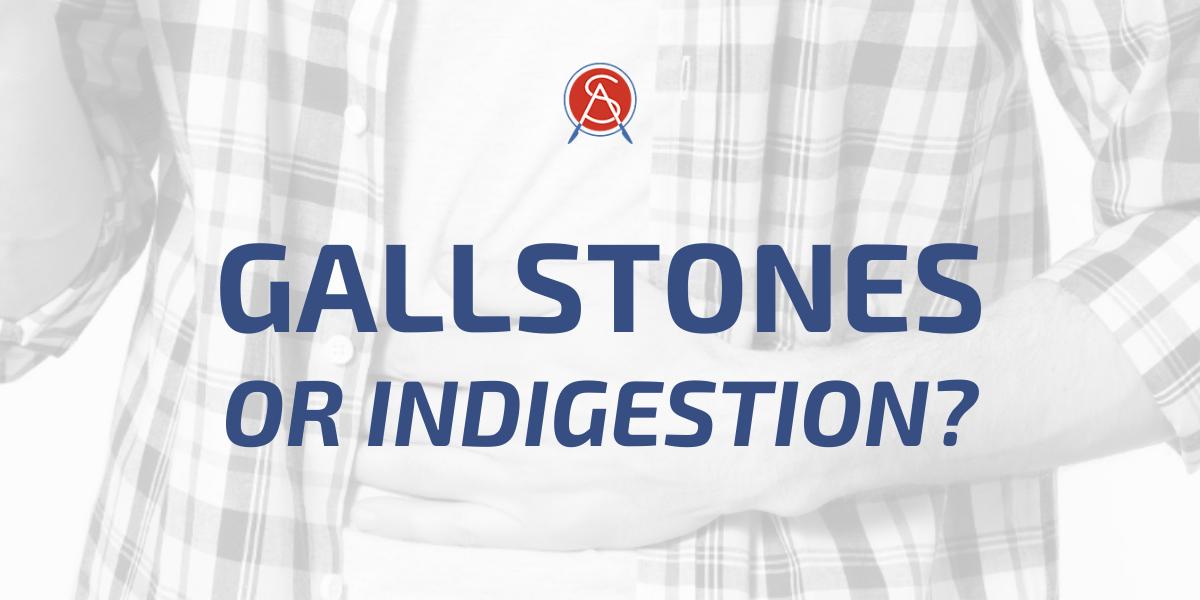 Indigestion is generally considered a symptom of an underlying problem and can even be a symptom of gallstones. It is not an unfamiliar feeling for many people. Typical causes of indigestion include overeating or consuming your meal too quickly. It can also be triggered by foods that are fatty or greasy, drinking alcohol or caffeine, behaviors like smoking, certain medications, or anxiety. Indigestion can also be a symptom of a range of digestive concerns including gallstones, ulcers, constipation, pancreatitis, gastritis, or even cancer. It can also have no known cause and simply exist on its own.

Major complications are not common from indigestion, but it is an uncomfortable situation that can impact you if it is frequent or severe. The first line of defense is removing common triggers like the foods or behaviors mentioned above. If this doesn’t result in elimination of or decrease in the severity of your indigestion, discuss your issues with your primary care provider to determine if you should have further tests done or if you should see a specialist. Typically when indigestion is the result of another underlying condition, other symptoms will present.

The gallbladder is a small organ shaped like a pear that most people know for the trouble it can cause. The main function of the gallbladder is to store bile. When functioning normally, the gallbladder is full before a meal. When digestion starts, the gallbladder releases the stored bile into the small intestine as it deflates and flattens itself. Gallstones occur when bile, the fluid produced by the liver that aids in the breakdown of fats and the absorption of some vitamins during digestion, becomes hardened. If the stones are small, and most are, they do not typically cause problems. When stones grow to be larger, they can block the ducts. As the gallbladder contracts to release bile into the system, the stones cause pain as they obstruct the duct. A gallbladder attack, as it is commonly called, is the result.

The gallbladder attack is characterized by biliary colic pain, recurrent pain near the liver, most likely following a large or high fat meal. The pain is sometimes described as dull, however some patients find it sharp. Some patients experience this reaction after every meal, while others only occasionally. This pain in the right side of the upper abdomen builds in intensity and can last for hours, but usually begins about an hour after the meal and subsides as the gallbladder relaxes. This pain can present in the middle of the abdomen or, in some cases, be felt in the back. Often a gallbladder attack is accompanied by indigestion’s, nausea, or fever. Gallstones that become trapped in a duct can further cause inflammation in the gallbladder, pancreas, or the bile ducts themselves.

If you think gallstones are the cause of the symptoms you are experiencing, discuss your symptoms with your care provider. To diagnose gallstones, blood work and an ultrasound will likely be ordered to view the gallbladder and surrounding systems. If it is determined that gallstones are present and causing issues, the most effective treatment is surgical removal of the gallbladder known as a cholecystectomy. This is a routinely performed laparoscopic or robotic surgical procedure. When the gallbladder is removed, bile simply flows directly from the liver to the small intestine, allowing digestion to continue as normal, minus painful gallstone symptoms.

Major Tells That It’s Your Gallbladder

There are a few tells that can help you differentiate if you are suffering with common indigestion or gallstones. First, consider timing. Discomfort immediately following, or even during meal is typically not associated with gallstones, but more likely indigestion. Gallbladder attacks typically takes an hour or so to set in after eating. Pain management is also key. You are not likely to experience any relief with over the counter indigestion medication or changes in position, passing gas or a having a bowel movement. Another red flag for gallstones can be your weight. Rapid weight loss can be a trigger for developing gallstones. Obesity is also a risk factor in itself. Other complications that spell gallstones over indigestion are jaundice, or yellowing of the skin or eyes, and pancreatitis, an infection of the pancreas.

Any time you are experiencing symptoms like those described, we encourage you to discuss them with your primary care physician and make an appointment with one of our surgeons. Chronic symptoms can sometimes become “normal” to those suffering, leading to delay in care and worsening of issues. There may be treatment options available to help you feel more comfortable and keep your body functioning as it should.