Attend A Seminar
Message Us 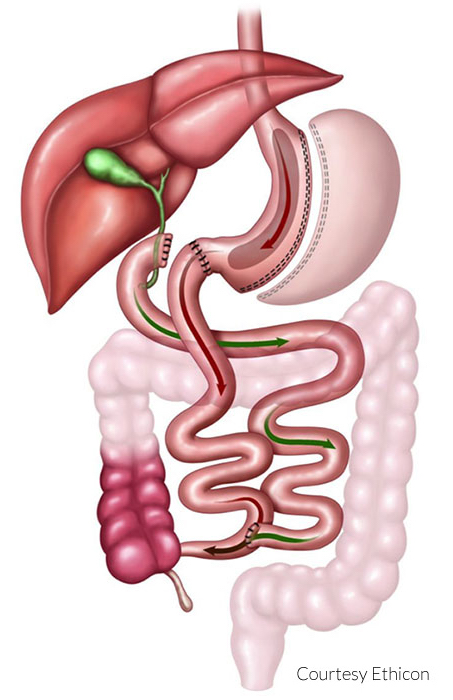 The Duodenal Switch, abbreviated to DS, is not a new procedure, but has regained popularity in recent years. Similar to the Roux-En-Y gastric bypass, the DS employs a combination of restriction and malabsorption – making the size of the stomach smaller while also limiting the absorption of calories in the small intestine – performed in a laparoscopic or minimally invasive manner. Of all the major bariatric procedures offered, the DS has the highest potential for excess weight loss.

How The Duodenal Switch Is Performed

When it was first conceived, the vertical sleeve gastrectomy (gastric sleeve) was not a stand-alone procedure, but the first step of a Duodenal Switch, which was performed as a staged operation, primarily for extremely obese patients. The procedure is now performed in a single, minimally invasive surgery, meaning five small incisions are used, instead of the traditional large single incision of open surgery.

The minimally invasive or laparoscopic offers many benefits over traditional open surgery including a shorter hospital stay, less pain and blood loss, better cosmetic results, lower chance of incisional hernia and a significantly lower risk of infection at the incision sites.  The DS can also be performed with robotic assistance. During robotic surgery, the surgeon has complete control over the robotic arms.

Surgery begins similar to the gastric sleeve by removing the larger, outer portion of the stomach along the greater curvature. What is left is about the size of a banana – approximately 20 to 30% of the original stomach size. The portion of stomach tissue that is cut away is then removed from the abdomen, typically through an incision in the belly button.

The DS requires a one to two-night stay in the hospital for most patients.

Duodenal Switch results are generally excellent. Patients can expect to lose up to 80% of their excess bodyweight and improve or resolve most of the diseases associated with obesity. Of course, results will vary between patients and their willingness to follow post-op lifestyle requirements.

Benefits Of The Duodenal Switch

Risks And Considerations of The Duodenal Switch

The duodenal switch, while a great fit for some patients, is just one of several options available to patients suffering from obesity. Attending a seminar, followed by a consultation with a one of our highly qualified surgeons, is the best way to learn more about the duodenal switch.

Is also important to note that the duodenal switch is considered by some insurances to be an experimental procedure. Depending on your insurance company, this procedure may or may not be covered. We will assist you in determining your coverage and which procedure is most suitable.